It is harvest time! I love this time of year! The whole family always goes to help Father in the fields. The boys join men from the village in cutting the crops, even little Alfred and he is only seven, and the women spend the morning making lunch. We then all meet for a huge picnic. This will be the first year that I cannot attend. I have spent much of my time this month staring out of the windows at the dusky orange light that tries to find its way into the basement. To be able to take a few hours each day just to go outside and breathe in the fresh air! On my days off this is exactly what I have been doing. I either walk the grounds of the estate or I walk back home. Mother often has a nicely fresh-baked loaf to greet me and my brothers and sister are always excited to see me.

I do not get so many chances to meet with my brother William though, as his employment in the village brickyards means that he is rarely at home when I am. However this weekend I received a note from him inviting me to go to the pictures in Bury St Edmunds. I was so excited! He borrowed Father’s cart and drove me into town. We went to see a movie called Top Hat. It was thrilling, filled with dance, drama and the most beautiful costumes. On my return to Ickworth I taught some of the other girls a number of dance moves I saw Ginger Rogers performing. Though I know I did not look anything like her, in my imagination I was in America dancing with the stars.

This week in 1935 witnessed celebrity drama – and students preparing for a new term:

A ROYAL PARTY: the Royal Family enjoyed a grand party at Balmoral to welcome Lady Alice Scott to the family. When she arrived her future husband, the Duke of Gloucester, was busy at a shooting party so she was greeted by her mother-in-law-to-be, Queen Mary. The Prime Minister, Mr. MacDonald, later joined the party after spending the day playing golf on the private Castle links.

A ROYAL FUNERAL: this week in 1935 saw the funeral of Queen Astrid of Brussels. She had been killed in a car crash and her premature death shocked communities worldwide. Queen Astrid had been an adored member of the Royal Family – charitable, approachable, beautiful and charming. King Leopold had been driving and lost control of the car, falling down a steep embankment and colliding with two trees, passing over a stone wall, and finally falling into a lake. The King was injured but he crawled to where his wife was lying and she died as he cradled her in his arms.

WELLS FALLS OFF A LADDER: H. G. Wells, author of well-known works such as War of the Worlds, The Time Machine, and The Invisible Man, was injured after he fell from a ladder this week in 1935. The 65 year old had been climbing an iron ladder to inspect the roof of a house rented by Princess Rospigliosi when he fell and landed on his face. Found by a housemaid he was transported to hospital in a taxi and suffered a temporary loss of the use of one eye.

STUDENTS TODAY – 1935: The Times reported this week in 1935 that the Mayor of Cambridge was unhappy with the state of modern students: ‘nowadays an old pair of flannel trousers and a sports coat seemed to constitute the wardrobe of the undergraduate whereas years ago the younger members of the University were regarded as arbiters of fashion and were invariably well turned out.’ And what did he blame for the shabby students? – motor cars. Not only were they putting coachmen out of business and creating a nuisance on the roads but the need-for-speed students no longer thought smart dress was needed when they were hidden behind a wheel rather than presented in a carriage.

For a bit of a difference here are some adverts that appeared in The Times this week in 1935. It is not just the written word that can tell us how people lived in the past: 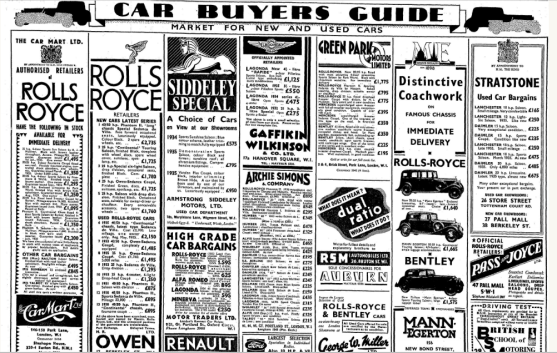 FASHION NEWS: what were people wearing in the Autumn of 1935? This week The Times toured some of the more popular London shops and reported the results of their research. The answer was: trimmings of fur and metal! Debenham and Freebody offered new silks emphasising a metal note for its fashion-hungry customers. You could buy a black taffeta with ribbon stripes in metal and velvet or a georgette with tiny sequin stars superimposed on the silk. Glizty glamour!

WHAT – AND WHAT NOT – TO EAT: the constant debate about what we should and should not eat is not a modern phenomenon. This week in 1935 a study showed that meat was an essential element in a healthy diet. Of course, too much was not a good idea, but too little meant people were suffering from low stamina and resistance to illness. According to the report, ‘the London stockbroker who started the day with bacon and eggs and fish, followed by luncheon of soup, fish, entrée, and joint, and the same for dinner, was overdoing it’, but that the middle classes were not eating enough, ‘trying to live up to a stage of society they could not really afford, they had little to spend on food.’

MONKEY BUSINESS: This week in 1935 the people of Canterbury were being terrorised by a monkey. The cheeky chappy had escaped from Whitstable Amusement Park and had been loose for two weeks. It helped itself to fruit and vegetables and apparently had a particular liking for tomatoes – stripping the produce from grower’s trees and raiding larders throughout the town. The police attempted to capture it but failed miserably: ‘it was trapped in a conservatory with all the exits closed. The monkey took up a strategic position on the top of the cistern, and was only enticed down by provocative noises and by a policeman making faces at it. Strawberry nets were then spread, but as the attacking force closed in the monkey tore through the net, crashed through glass, and shortly afterwards gazed derisively down from the steeple of St. Paul’s Church.’

SPACE-SAVING STORAGE: A NEW INVENTION – anyone who has had to consult newspapers for research, historical or otherwise, knows that you can easily drown under a pile of deceivingly flimsy copy. In 1935 a new system had been invented to solve this problem. Rather than keeping original copy in files and boxes newspapers were now printed onto film and stored in reels. Microfilm – the arch nemesis of the newspaper researchers of today – was hailed as a progressive step in record keeping. Not only could newspapers be filed more easily but the safety-type film reels proved less of a fire hazard to public libraries and newspaper offices than piles and piles of paper.

A week of boundary-busting relations:

THE NORTH AND SOUTH: this week in 1935 a new express service by the London and North Eastern railway was introduced between Newcastle and London. The train, which was named “Silver Jubilee”, could travel the 268 mile journey in just four hours!

THE BRIT AND THE AMERICAN: an article appeared in The Times this week in 1935 discussing the similarities and differences of British and American personalities. Mr. Harold Nicolson remarked that one of the largest differences that led to misunderstanding between the British and the Americans was temperature. ‘Friendships between Englishmen and Americans have been broken by the question of whether a room was too hot or too cold. He had met Americans who had assured him that during a visit to Great Britain the only warm thing they ever met was a whisky and soda. He had known Englishmen who had left America with great speed fearing apoplexy because of the heat.’ This received great laughter from those attending the American Chamber of Commerce luncheon held at Hotel Victoria. He also noted that though both Brits and Americans exhibited shyness this was presented in very different ways. ‘The Englishman’s shyness took the form of reserve, and the American’s took the shape of uncertainty. Suffering from reserve the Englishman said less and less, and uncertainty made the American say more and more.’

HUMAN AND ANIMAL: this week the Canterbury monkey was finally caught but it wasn’t by the police. An elderly woman had gained the animal’s friendship with gifts of bread and milk, bananas, and nuts and it finally became so trusting that it entered the house to feed from her hand. She then enticed it into a shed and locked the door. The lady, a Mrs. Ellenor of Cross Street, remarked that, ‘I could have cried when I thought how the monkey had trusted me.’