LOOKING TO THE FUTUTRE: Have you ever wondered what the world will look like 100 years in the future? Well, The Times did this week in 1935. In an article headlined ‘Vision of Education’ the newspaper predicted how society and the education system would look in 2035. Prediction 1: economic problems would be solved and people will devote their, ‘main energies to living and not in providing the means for living.’ Prediction 2: ‘a sane and educated population would be brought up to look on international law-breakers as criminals and would never permit war to take place as a so-called method of settling disputes. Prediction 3: ‘the only sites which would be considered fit for schools would be in the projected green belts outside the industrial areas.’ Prediction 4: ‘with smaller classes the maintenance of discipline by old-fashioned methods of mass suppression would no longer be required. The difficult and troublesome children would be subjects for the psychologist and the psychiatrist.’ Prediction 5: ‘with a falling population and smaller number of births, a scientific rather than a sentimental point of view would prevail and the quality of the human species would no doubt receive as much attention eugenically as was now devoted to the quality of flocks and herds, pet dogs, and cage birds.’  OO-ERR

CHARING CROSS UNDERGROUND GARDEN: a miniature garden with lawns, shrubs, and a rockery was constructed at Charing Cross underground station this week in 1935.

THE NATIONAL TRUST COMES TO THE RESCUE: Under the headline ‘Saving the Beauty of England’ The Times explained how the National Trust had been gradually acquiring more sites of historic interest and natural beauty.

CHRISTMAS GIFTS: With Christmas just one month away The Times provided its readers with ideas on what to buy their loved ones. This week in 1935 The Times Literary Review was printed, offering an insight into the latest best-selling books. An article informed readers that railway tickets could now be bought as Christmas gifts. This was a new scheme for 1935 – members of the public could purchase and send railway tickets to their relatives and friends along with an invitation for Christmas or New Year. What a good idea!

The other servants at Ickworth have now become what I can only describe as my extended family. Quite how so cold a house could have become a home I cannot explain, but this is exactly what has happened. Mrs Seddons, the housekeeper, who filled me with such terror on my arrival, has shown herself to be the mother of the entire household. If you work well and follow the rules she is one of the nicest people you could ever meet. But I can recall numerous occasions on hearing her shouts echoing through the corridors, directed at some lazy or forgetful housemaid. The level of obedience she commands just by the sound of her approaching footsteps is awe-inspiring.

I have made many good friends during my time here. Rose Stringer is the name of the senior housemaid who has charge over me and another maid named Florence. Both these girls have become like sisters to me. We spend every moment we can spare together, gossiping and imagining our future lives as wives and mothers. Harry, a footman, Jim, the odd man, and John, the hall boy often tease us saying that we will never marry and will remain at Ickworth for the rest of our lives. The boys are always teasing us housemaids! But, then again, we are often teasing the boys too.

FLOODS: Heavy rain that fell during the weekend caused widespread floods in the south of England. It seems that the November of 1935 was an especially wet one. The Times reported that in the first 17 days of the month twice the amount of rain normally experienced in the whole of November had already fallen.

TV: It was reported this week in 1935 that television was now available to members of the public in Paris: ‘the first public television broadcasting station in Paris’, was opened, ‘the studio itself is in the Rue de Grenelle, and the transmitting apparatus is at the top of the Eiffel Tower. The full range of the transmitter is not yet known, but it will easily include the whole of greater Paris. As only a few amateurs possess television receivers public receivers at various points in the capital will be installed.’

ROYAL CHRISTENING: this week in 1935 Prince Edward, son of the Duke and Duchess of Kent, was christened in the Private Chapel at Buckingham Palace. King George and Queen Mary already his grandparents now also became his godparents.

ANIMALS AT THE ZOO: The Times reported this week in 1935 how, ‘an animal lover made a present to the Zoo of 55 Greek tortoises which he had brought, out of compassion, from a street hawker.’

ARMISTICE DAY: November 11th 1935 marked the seventeenth anniversary of the end of the Great War. Services were held at St. Paul’s Cathedral and Westminster Abbey with large numbers of people visiting the Empire Field of Remembrance at the Abbey. Over 300,000 women set out with 40 million poppies in the hope of raising money for the Haig Fund which helped the British Legion in its work for ex-servicemen and their families.

THE GENERAL ELECTION: this week also witnessed the election of Stanley Baldwin as Prime Minister (14th November). The image below shows Miss Thelma Cazalet shaking hands after she retained her seat in Islington East. 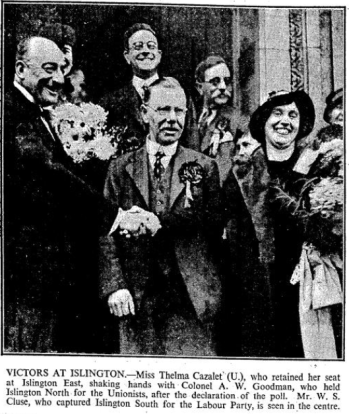 A ROYAL WEDDING: On the 6th of November the Duke of Gloucester and Lady Alice Montagu-Douglas-Scott were married. Here are some photographs of the stately event:

The bride walks down the aisle

The Duke and Duchess of Gloucester on the balcony 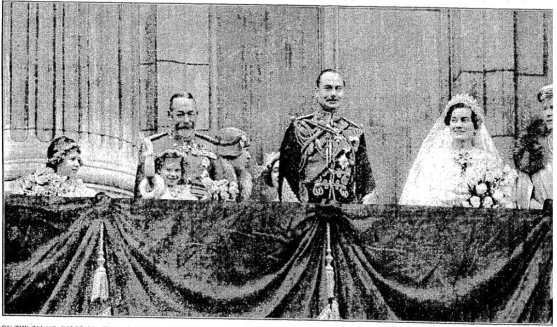 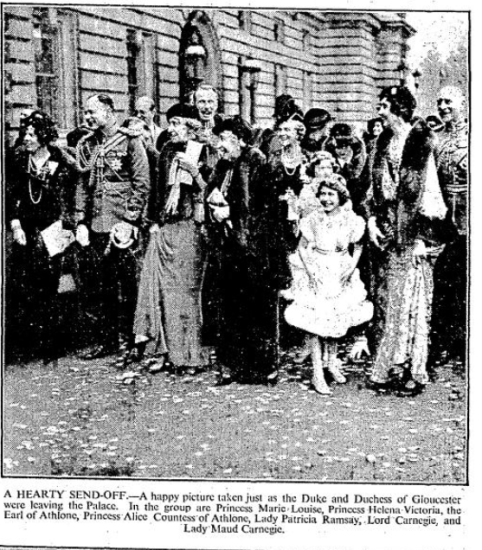 WEDDING GIFTS: The Duke and Duchess of Gloucester received many elaborate wedding gifts. These included a set of turquoise and diamond earrings, a diamond tiara, two bow broaches, four chain bracelets, a cluster ring, fancy cluster earrings, and a cluster necklace from Queen Mary to the bride. Others gifts included thirty-eight water-colour paintings, a jewelled evening bag from the Viscount and Viscountess Hampden, a two-handled silver cup from the Cabinet and an antique oak hall chest from the Prime Minister. Princess Elizabeth and Princess Margaret gave their uncle and his new wife a pair of silver table lighters.